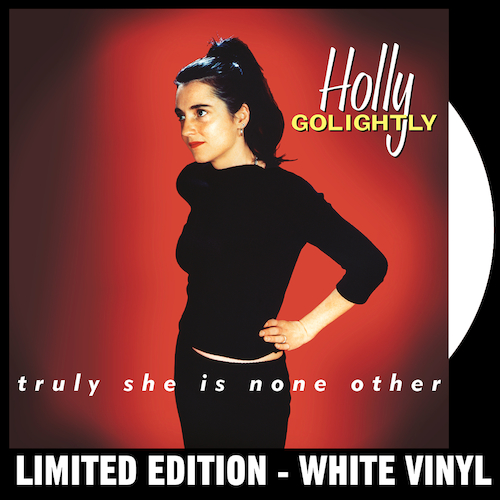 Truly She Is None Other (WHITE VINYL LP)

Holly Golightly - Truly She Is None Other (WHITE VINYL LP)

10 year anniversary re-issue of the expanded verion of Holly's greatest album! (Or 18th anniversary of the original)

Collector's edition on WHITE vinyl and digipak CD
It's been out of stock for a while so we've decided to make this re-issue a little bit special. Often cited as perhaps her best solo album Truly She Is None Other was recorded in 2002/3 at Toe-Rag Studios by Liam Watson and features the song 'Tell Me Now So I Know' which was picked for the main title theme for Jim Jarmush's 'Broken Flowers' movie.
Among the nine Holly originals the album features two Ray Davies songs ('Time Will Tell' & 'Tell Me Now So I Know'), along with 'There's An End', (penned by her friend Craig Fox from The Greenhornes.) There's also a fine version of Jessie Mae Robinson's 'Black Night', a song most famously covered by Muddy Waters.

Backed by the cream of Toe-Rag's in house musicians, this is Holly Golightly at her finest.
With sleeve notes by none other than Jack White III.