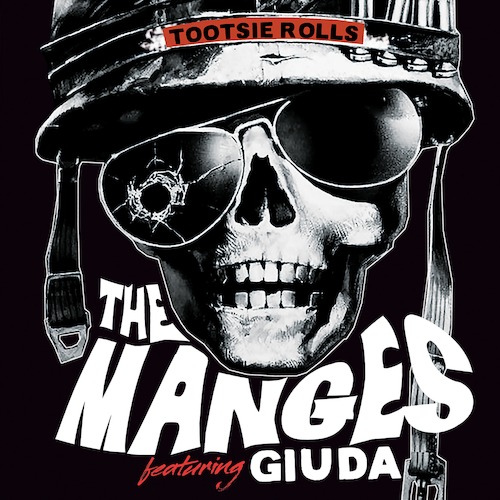 **STRICTLY ONE PER CUSTOMER**

They own the record label Striped Records and manage the Italian festival Punk Rock Raduno.

MASSIMO FROM THE MANGES TALKS ABOUT WORKING WITH GIUDA...

“We like Giuda. A lot. Over the years we've met at shows, played together a bunch of times, and we believe the respect and admiration is mutual.

We didn’t want our latest album to sound like all contemporary punk rock of our scene. We are a so-called “Ramonescore” band but we started more than 25 years ago so we think that definition is not enough to describe what we've done and what we’re still doing.

We love what Giuda did with '70s glam rock… they took a kind of music that was more than 40 years old and made it fresh, catchy, relevant today, while still following a specific canon.

They produce their own records so we thought they could totally improve a Manges one. They know punk rock pretty well too and that’s a fact. Just think about their astonishing previous band Taxi! We wanted to see what could happen by having Lorenzo and Danilo’s approach on our band’s music.

The studio sessions in Rome were great, we have been very productive although the environment was pretty laid-back.

One of our favorite songs for our new album is called 'Tootsie Rolls', and it kinda stands aside from the rest of the album, being a more pure rock tune. On this one, our producers could totally work on their favorite arrangements and structure, to the point that we ended up having two versions: one, the album song, and two, a remixed version featuring members of Giuda, called 'Tootsie Rolls - Part II'. What a treat!”