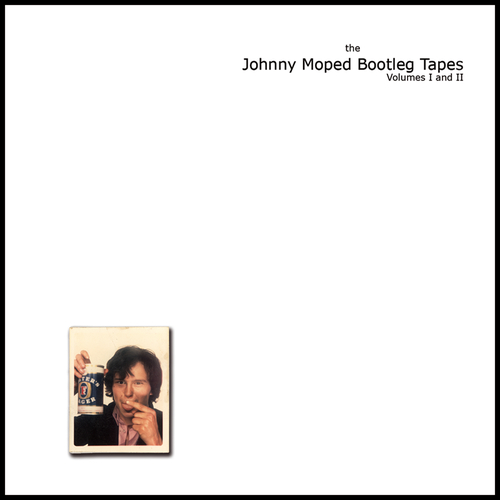 The Complete Bootlegs Vol I & II

Well first off lets say how totally honoured we are to be releasing a Johnny Moped Record, the bootlegs have always been one of my favourite tapes and the 7" that Chiswick released with the first album is legendary.

Hopefully there will be more from where this came from... Keep 'em Peeled!

So Johnny Moped then... well... This is 'borrowed' from the lovely Trakmarx website... www.trakmarx.com and from Dave Berks sleeve notes in the Chiswick CD 'Basically'

"Johnny Moped had all three ingredients necessary for maximum rock'n'roll: amateurism, mayhem & humour. As the proud owner of a pair of Slimey Toad's shorts I give my full endorsement to this silver digital beermat. Essential punk rock!" Billy Childish (1995)

On the inside sleeve to Johnny Moped's debut LP, "Cycledelic" (Chiswick - Wik 8 - 1978), is the legendary 'Johnny Moped Family Tree'. Anybody who's good at time lines - or has taken lessons from Pete Frame - should track down a copy & try to make some sense of it. For the rest of us, all you need to know is: Johnny Moped were originally called Genetic Breakdown, came from darkest Croydon - & consisted of Johnny Moped (aka Paul Halford), Xerxes, Fred Berk, Dave Berk, Ray Burns (aka Captain Sensible) & Phil Burns.

They jammed all day, everyday, recording the lot as they went - & spent their evenings listening to the fruits of their labours in the company of a few beers in the most outré playback venues imaginable: the Gas Works, Gatwick Airport, on the top of multi-storey car parks – or the local park (where they cooked grub on a portable gas stove). They never played the same song the same way twice, & consequently, Johnny & Xerxes had quite a job keeping up - & subsequently became dextrous at making things upon the spot. Johnny Moped were desperate to start gigging – so desperate, in fact, that they eventually did a gig in Dave's back garden - & paid a few local kids to act as the audience!

The major problem for Johnny Moped was their singer. To say he was unreliable is somewhat of an understatement – he was constantly AWOL! Johnny lived with his girlfriend, Brenda, who in turn lived with her mother, who hated the group - & it's members - & was often reluctant to let Johnny out of the house to waste his precious time with childish rock'n'roll shenanigans. The rest of the group had to resort to guerrilla tactics, kidnapping the shaded man-in-black as he came out of work - & bundling him into the boot: Moped Class. This worked fine for tours of the gardens of Croydon - but hampered the group's professional ambitions, somewhat.

Sooner or later, Ray Burns became Captain Sensible, cut his hair - & beat Sid Vicious to the bass vacancy in Punk Rock visionaries, The Damned. Johnny Moped's first few gigs were as support to The Damned, with Captain playing two sets a night. It didn't take a genius to work out the next bit: Johnny Moped needed a proper guitar player of their own. The advert went a little something like this:

Two applicants came forward: Slimey Toad & Chrissie Hynde (The Unusuals, Masters Of The Backside, Mike Hunt's Honourable Discharge, & later, The Pretenders). Dave Berk had already played around a bit with Mr Toad - when he'd replaced Chris Millar (Rat Scabies) in Tor (a name Rat would often later invert to Rot). Dave had also had 'previous' with Chrissie & Fred in The Unusuals. The new line up didn't really gel, however. After only a handful of gigs at The Roxy, Chrissie was ejected on Slimey Toad's orders - because she didn't quite fit in.

By now as settled as any Johnny Moped line up could possibly hope to be, the group contributed the classic "Hard Lovin' Man" to the "Live At The Roxy" LP - & self-released their seminal "Official Johnny Moped Bootleg" - before signing to Chiswick Records in a hail of lager.

The debut Johnny Moped 45 was the raucous & totally indispensable: "No-One"/"Incendiary Device" (Chiswick – NS15) - the Mopeds were belatedly forced to switch sides due to a BBC objection to the 'stick it in her lughole' refrain on "Incendiary Device" - "No-One" thus becoming the A-side by default.

The Mopeds second 45 – "Darling, Let's Have Another Baby" - was a masterstroke of marketing genius: released one week, awarded 'SOTW' status in all 3 weekly music papers the next - & promptly deleted the week after (sounds almost legendary in concept - but the harsh reality was that the single was plugged to death by the group's visionary management - but still failed miserably to trouble the scorers down at the BMRB – it was, however, later covered by ex-Drug Addix singer, Kirsty McColl - RIP).

Johnny Moped's aforementioned debut LP, "Cycledelic", was eventually released in April 1978. It had been a bummer to record - because by this stage, Johnny was practically under house arrest after the group's van had run over Brenda's mother - causing her to finally loose patience with whole scenario. In order to get Johnny to the studio on time, the others met him from work, spun some tale of needing a group meeting in some spurious café or other - & promptly drove him all the way to the studio non-stop. The vocals were thus laid down in one day. A "Mystery Track" was added to the LP later at Roger Armstrong's (Chiswick Big Wig) bequest – Johnny did the vocals for this cut over the phone. The "Mystery Track" eventually appeared on the LP in the same place as "VD Boiler" - as a piece of concentric tracking – you got one cut or the other – depending where you put the stylus. Revolutionary. The rest of the LP was made up of live cuts recorded at The Roundhouse. Obviously, Johnny nearly didn't turn up then, either. The group had set up & sound-checked – only to find Johnny queuing up outside the venue to pay to get into his own gig – with 15 minutes to go to show time.

Johnny Moped gigs were infamous: Slimey Toad specialised in ridiculous outfits & PA stack climbing - & you never knew what was going to come out of Johnny's mouth at any given moment (diatribes, abuse, surreal episodes). They often played with totally the wrong type of groups – got caught up in the Punk v Metal wars – & toured with Motorhead! They even once played the Hammersmith Odeon - & got booed ON – only to leave the stage to 2,000 people chanting: "Shit! Shit! Shit! Shit!"
Johnny Moped collapsed in a heap heading downhill towards the latter stages of 1978. A second LP was posthumously released in 1991 – "The Search For Xerxes" (Delt-LP6) – featuring songs originally written in 1978. There have been the odd re-union gigs from time to time, including the Johnny Moped Big Band revue at the Marquee in the mid-90s - & there could well be more in the future – but that depends, as always, on Johnny.

I recently had the pleasure of meeting the charming Mr Dave Berk at a bash for Keith Morris at Dingwalls (or whatever it's called these days). He was a marvellously engaging chap who had the temerity to look younger than me – whist being – in reality – at least 8 years older than myself. I cheekily asked him if he had any copies of the legendary "Basically The Original Johnny Moped Tape" 7" 45 (Chiswick – Promo 3) lying around – he confirmed that he had two copies left - & I attempted to buy one of him forthwith. He wasn't having any of it, though - & subsequently sent me a copy free of charge in the post. Hooking him up with Damaged Goods was the least I could do in return - & hopefully – we'll all benefit from that in the long run.