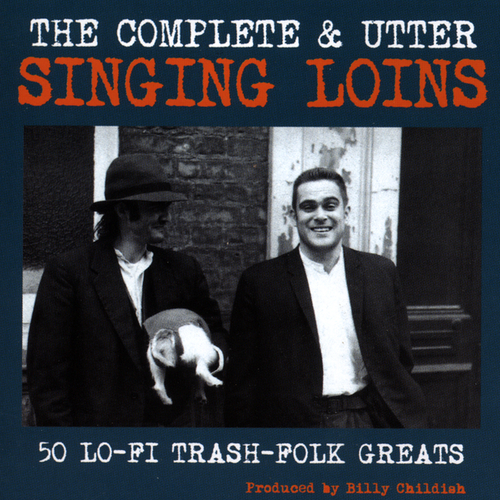 The Singing Loins - Complete and Utter

Brief History of The Loins

We formed around Christmas time l99O. I'd been fronting various line-ups of a group for ten years, but after a couple of scrapes with wanky major labels I became fed up and decided to strip it all down to an acoustic duo with our then bass player Chris (Arfur) Allen. He hadn't written before, but was a fine acoustic player with a genuine rootsy feel, stemming from his Irish upbringing. We just wanted to write honest, bare songs, outside of any particular style, just songs, whatever that means. The first thing we came up with was "Hauling In The Slack", so, that set the precedent. Now, of course,you can't operate in England without being pigeonholed, so we coined the phrase " Authentic raw folk from the Medway delta" and started playing what local pubs and clubs would have us. It was good fun, getting up people's noses. We came across some truly bigoted deadheads who thought new folk songs were an anathema; these idiots tended to be chartered accountants by day, and at the weekends whined in nasally tones about working down the mines. They really believed they were protecting sacred texts and that the whole folk genre was complete & pickled and never to be tampered with. There
were also a few good souls who at least admitted they couldn't decide if what were doing was "either shit, or brilliant."

At the time Billy was helping me to edit my first collection of poetry for publication on Hangman Books; he liked the songs and attitude and offered to put an LP out on Hangman records. So, as soon as they were written, we took our first dozen songs along to his house in May Road, Rochester, on the afternoon of Saturday June 2O, '9l (it says on the master tape box), had a few beers to calm the nerves, and stuck them down.

Chatting in the kitchen at the time were Bruce, Kyra and Holly, so we roped them in too. Billy recorded us on a circa l96O Revox half-track - Half track means you record live into two mics which mix straight down to one mono track. Billy would set the levels as loud and trebly as they would go, turn the clunking great knob to start the tape, and dash into the bog to join in with the general stamping, bashing and singing.

"Songs for the Organ" and "Steak & Gravy" were recorded like this, live in Billy's toilet (for the acoustics), with whatever guests were available, standing in the bath, kneeling on the toilet seat, the taps dripping, the phone going off in the kitchen next door; it was great! If we didn't get it by the third take then it was abandoned. It was all about feel, not perfection. By the time we came to record "Penny Plain-Tuppence Coloured" and "Clever Clogs & Big Head", we'd lost a bit of momentum – I'd moved away to do screenwriting at the National Film School, so we were only able to snatch a few weekends and holidays for writing, playing live and recording.

We recorded most of the songs live at Billy's, as before, but then the tape was transferred onto multi-track at Red Studios, and guests added their bits as and when we, or they, were available. By '96 it was all done, bar the shouting. We enjoyed some great gigs in Medway, London, France, Holland, Belgium, Germany & Spain, and wrote a batch
of songs I'm proud of.

And then, we played a "one-off" reunion gig, l7 July 'O4, at the Tap 'n' Tin, Chatham, to launch "The Complete & Utter Singing Loins" and enjoyed it so much we decided to give it another go. We were going to bill it as two old cunts doing a Singing Loins tribute act, but once we'd put our faces on and tightened the corsets it wasn't too bad.