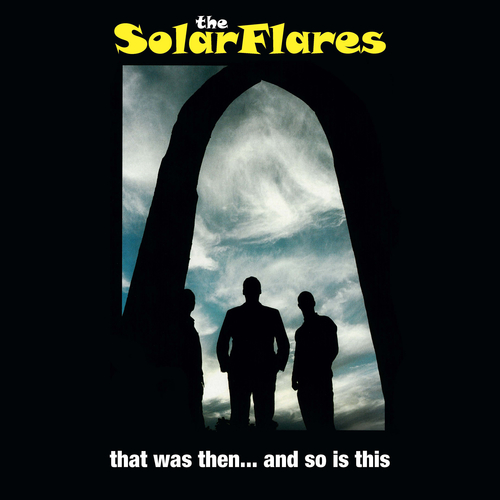 That Was Then... And So Is This

The Solarflares - That Was Then... And So Is This

*THREE CLASSIC MEDWAY PSYCH-BEAT ALBUMS BY THE SOLARFLARES AVAILABLE ONCE AGAIN – ON COLOURED VINYL*
Britpop? Monged out berks in kagouls peddling poor rehashes of Rutles tunes and/or a lone JB beat? *blows raspberry* Meanwhile, down in Kent, ‘tween 1999 and 2003, much more interesting tuneage was afoot. Former Prisoners / Prime Movers cohorts The Solarflares had further distilled the myriad pleasures of hard-edged, soulful 60s beat-psych, powerhouse guitar/organ instrumentals, and world class (but never wanky) riffage into a classy package, replete with memorable, groove-heavy tunes with knockout harmonies and that big, bad beat. It’s fair to say that messrs Graham Day (guitar, vocals), Allan Crockford (bass, vocals), Wolf Howard (drums, vocals) and, latterly, Parsley (organ, vocals) deserve more acclaim, even from diehard fans of The Prisoners and their many other combos, which is where these three most welcome reissues come in…
“Psychedelic Tantrum”, originally issued by Anglo-German label Twist in 1999, is an invigorating, intoxicating mix of suss and strut, hitting yer lugholes running with the searing “Mary” and running through the dancefloor-friendly instro “Apollo Go-Go” to the tripped-out “Shadow of the Past” and a mighty take on The Misunderstood’s “Find a Hidden Door”. To say it’s quite a debut is a bit of an understatement, and as with the rest of their output, it sounds gloriously rich and timeless, like it could have been recorded at any point since late-1966…
“That was Then… and so is This”, their sophomore set, came out on Twist in 2000 and features less gloriously distorto production but don’t let that fool ya into thinking it’s a slouch – no sir. The album’s expanded, richer and more defined (dare I say, cinematic?) sonic palette encompasses kinetic acoustic riffery (“Miles Away”), fuzztastic beaters (“Sucking Out My Insides”) and the obvs Gerry Anderson-inspired (“Angel Interceptor”) – tis a stone pleasure, indeed!
And then we come to the ‘official bootleg’, as Allan calls it, namely “Can Satisfy You”, which the band put out on their Own Up label in 2003. Is this collection of live and studio cuts less than essential? Is it bollocks… no drop in quality, when it comes to corkers like the ‘electric’ version of “Miles Away” with Parsley’s killer organ that turns it into a mid-60s club soul classic, or on the slew of dynamite covers, which tell you more about where their heads were/are at better than anything I can write ya, including Wimple Winch’s “Save My Soul”, Ramones’ “Glad to See You Go”, Fire’s “Father’s Name is Dad” and the Sharon Tandy/Fleur de Lys/Rupert’s People classic, “Hold On”, the latter with Parsley on vocals, sounding like Don Fardon’s big bruvva!
So there you go, yer lucky buggers. Another three slices in the (thankfully) continuing history of properly unproper British rock’n’soul. As the Damned used to say, “Play it at your sister.” And if you’re an only child, well…