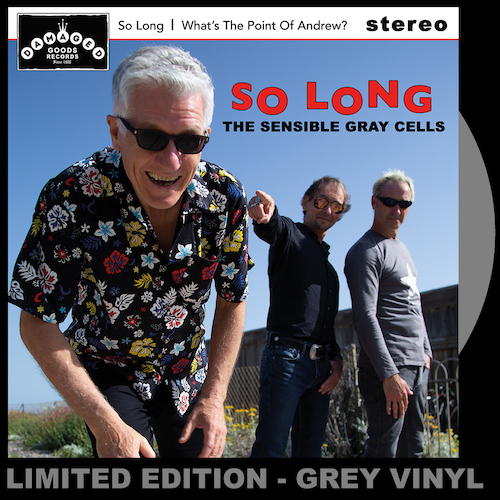 So Long/What's the Point of Andrew? GRAY VINYL 7"

Sorry, So Long/What's the Point of Andrew? GRAY VINYL 7" is out of stock.

The Sensible Gray Cells - So Long/What's the Point of Andrew? GRAY VINYL 7"

7” Taster for forthcoming album!
Limited to 300 copies on GRAY VINYL

Including exclusive B-side!
Members of The Damned & Johnny Moped!

Who, what and why are The Sensible Gray Cells?
Captain :- Paul Gray and myself being garage psych afficianados would prefer to hear more of this kind of music and this is our contribution to the cause. If I said that some of the songs were 'Damned rejects' that shouldn't be seen as an indication of inferior songwriting.. more that they're not wearing the right shirt.

‘So Long’ is the new single due out on Damaged Goods records. What’s the song about?
Captain :- Ha ha.. it's a bit like the intro to '60s TV's The Prisoner where Patrick Mcgoohan storms down that corridor to rant and rave at his boss as he delivers his resignation request. Were not that formal in punk rock but if we were this is what it might sound like.

The B-side ‘What’s the Point of Andrew?’ is written by Paul Gray. How does his approach to song writing differ to yours?
Captain :- I've no idea how other people write their tunes.. everyone's different.. I know he always comes up with the goods though - and this one's a cracker. Talk about hit the nail on the head.. although it might have been nice to give the Duke of Pork a whack instead.

A Postcard From Britain came out in 2013. What have you been up to since then?
Captain :- I've never been a prolific writer.. being a lazy so and so I think it's best to wait for inspiration to call.. which explains the 7 year gap..( how many albums could the Beatles have crammed in that period!) but in the meantime PG rejoined the Danned and we've gigged about a bit, which is always fun - CAN WE HAVE GIGS BACK AGAIN PLEASE!!!

Martin - Recorded two albums with The Weird Things. An album and singles with Johnny Moped. Writing and recording with Maxine who's adding piano and BV's to the SGC album.. Also recording drums for the AKA the Syndicate... And plenty of gigs..

Captain :- It's sad that high streets around the world have been destroyed by online shopping but nobody's forcing people to do it.. but what can you do. These are very strange times were living though - I just count myself lucky to have been around to witness the 2nd half of the 20th century.. a fab time for music, culture, ideas.. and that without even mentioning Benny Hill and On The Buses. The new album coincides with all this virus malarky.. which, unpleasant as it is will undoubtedly be used by the powers that be to tighten the screws on us little people on behalf of their billionaire paymasters. Blah blah, etc. There's a bit of that hidden away in the album.

Where and when did you record the album?

Captain :- With Rich from King Kurt.. he's got a studio in sunny Reigate (with a nice pub across the road) where we got together to see what material was on the go.. the answer was quite a lot of unfinished songs.. so the band spent the next few months on and off knocking diwn the best stuff (and a fair few pints of Timothy Taylor's Landlord bitter) - and aiming at 10 - 12 tracks (ending up with 14). and there's a fair bit of variety in there too. But the overriding criterion for inclusion had to be a strong, memorable melody. The Sensible Gray Whistle Test if you like.

This is the first album with Moped drummer Marty, what’s it like working with him?

Captain :- During last year's tour me and Paul agreed that Marty made the Mopeds sound fabulous.. so he was the obvious choice when it came to asking someone to join the band. He also sings.. which is good.. in fact the only thing to his detriment is his choice (as a South Londoner) of football team.

Which is best – punk, prog, or psych-pop?

Captain :- Yes.. all of those, mixed together in a steaming pot of wackiness and delivered with a English accent as exemplified by Syd Barrett and Ray Davies. I'm sure theres lots of wonderful modern pop music being made.. but if the piped garbage they play in supermarkets is anything to go by it won't be joining classics like the Beach Boys and T Rex in my record collection. End of rant!