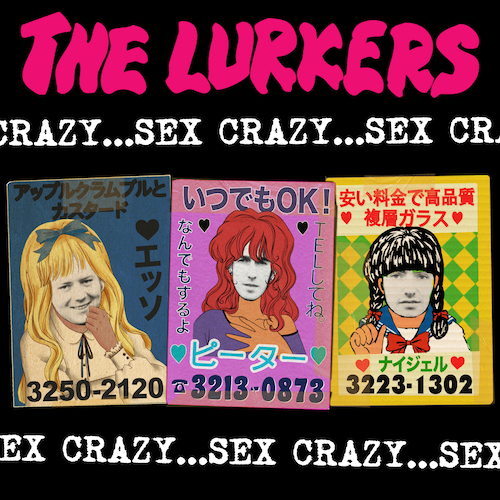 We asked the band a few questions...

Pete: At the most basic level I think it comes down to the energy, brevity and sheer catchiness of the best punk tunes.
Nigel: Because it lacks pretension and as it did back in '77 and anyone can have a go. Also……It’s Good.
Esso: It had a definite identity maybe – it was a movement that attracted people who didn’t feel part of the mainstream, and so once finding a home didn’t want to leave it, in fact remaining loyal to that thing that they felt saved them.

Pete: no not at all, I think i imagined i would be retired and living in a mansion by the age of 30.
Nigel: No, I thought I’d be living on my country estate deciding whether to drive the Aston or the Bentley and throwing rocks at the neighbours.
Esso: Not at all, twenty years old – 40 years was a different world.

Do you still listen to vinyl LPs? If we were to flick through your LP collection what album would surprise us the most?

Pete: Maybe Simon and Garfunkel ? When i was a kid they were constantly being played (along with Beatles, Dylan etc.) by my much older sister who thankfully had great taste in music...
Nigel: I’m drawn to contrary individuals so probably some Frank Zappa also acoustic artists like Tim Hardin and Eva Cassidy.

It’s been 4 years since the last Lurkers GLM album, why the long gap?

Pete: our recording process can be very slow, we bring each song to completion before moving on to the next, which means that if a song doesn’t work out then that’s probably at least a month of time wasted. but also "real life and health problems etc. can cause long hold-ups..
Nigel: You can’t rush genius (sic)
Esso: But that’s not long in Lurkerworld – can take months to decide what pub to go in.

You’ve released a couple of singles in the last year or two with Danie Centric from The Feathers, how did that come about?

Nigel: We were looking for a new angle and Danie had arranged a meeting with Esso to discuss his book ‘Gods Lonely Men’ I suggested he ask her if she would like to have a go at some vocals, gladly she did with stunning results. The girls got great presence and great voice, what more proof do you need just listen to ‘High Velocity’
Esso: We thought it would be good, and also ironically humorous to have us associated with a young girl singer - -she was/is good....

Pete: we wanted something that was immediately catchy and enjoyable with a bit of oomph and this song ticked all the boxes. it was actually just about the last track we finished and it was written and recorded in a matter of days, so although its a bit rough it does have a good freshness and energy about it.
Nigel: Along with ‘Boys in the Corner’ it has a commercial feel, not something we specifically aim for so when one comes up it’s a bonus.

‘Sex Crazy’ the track and the title of the album, is there a story behind it and it’s quite a bold title for an album what made you go with that?

Pete: i had the title in my head for quite a while before even attempting to put the actual song together, I knew it was a strong concept and i was pleased to discover that as far as i could see no one had used it before, so the actual writing of the song was fairly easy.
as a title for the whole album Sex Crazy works mainly cos its attention grabbing, but also i think most people will realise that it is a "non-serious" title.. and this is emphasised by the excellent sleeve artwork which we all love.
Nigel: Because people like sex and because it’s only got eight letters in it you can write it big on the cover.

I really like ‘The Boys In The Corner’ is that auto-biographical in any way? It reminds us of drinking songs from years ago, like the Pogues or ‘Little Old Wine Drinker me’ what do you think?

Pete: Yeah it is totally auto-biographical, but i believe that many people will identify with the lyrics, which have been somewhat magnified by this Covid situation.
The early versions of the song were actually much slower than this finished version, but they seemed a touch maudlin and solemn, so we decided to rock it up a bit and this worked well, adding a little defiance and celebration to the song , we are hopeful that it will be released as a single in the not too distant future.
Nigel: It’s simply a song about good friends that are no longer with us something we all experience sadly. The song is a tribute to them.
Esso: I like it too, it’s sad, Pete wrote it.

FLAC format technical details:
These FLAC tracks are superior to MP3 in that they are compressed without any loss in sound quality. For further technical details or player tips, visit the Help section