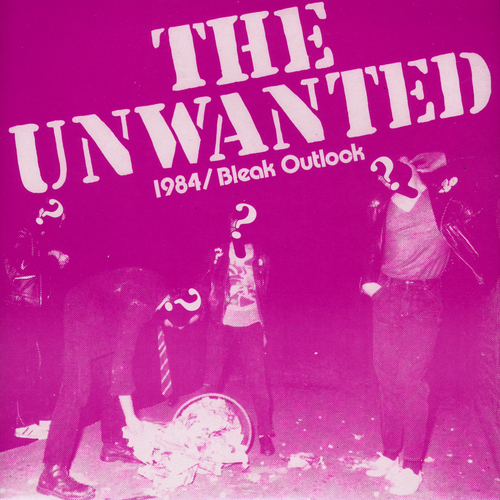 THE UNWANTED were first formed in mid march 1977 from a meeting between Ollie, a clothes shop proprietor in the Kings Road, and Mark Curzon, a student at a private educational establishment. Mark knew of Ollie's guitarist requirement due to a notice pinned to the back of his vile leopard skin t shirt.

After signing to Raw Records the band was as follows:

OLLIE WISDOM (19)
Schooled in Hereford dropped from college in Hereford after serving 3 months of his sentence. Served in an office as a shipping clerk / dogsbody then left due to terminal boredom. Next year on social and selling clothes in Kings road likes girls Debussey and speed.

DAVE POSTMAN (20)
Likes lager and sleeping on the job, plays cheapo fender bass copy and lent his 2nd cheapo fender to Sid Vicious. Was in Flowers of Romance with Sid.

ROBBIE (17)
Little known about this enigmatic character apart from the fact that the manager stole him from PEROXIDE ROMANCE. Likes: vile clothes and his vile drum kit

All their best moments are captured on the retrospective - Secret Past. There's a good live tape of them about at The Vortex doing songs like Fuck The Jubilee - Classic 77 band. Some great moments, for instance their cover of These Boots Are Made For Walking on the b side of Secret Police (1978 Raw) if only for the fact that it sounds like Wire. Track on Live at The Roxy - Freedom. Other great tracks Bleak Outlook and 1984.

Two members later ended up in the Psychedelic Furs. Unconfirmed reports now have Ollie as an ageing dance DJ !!!