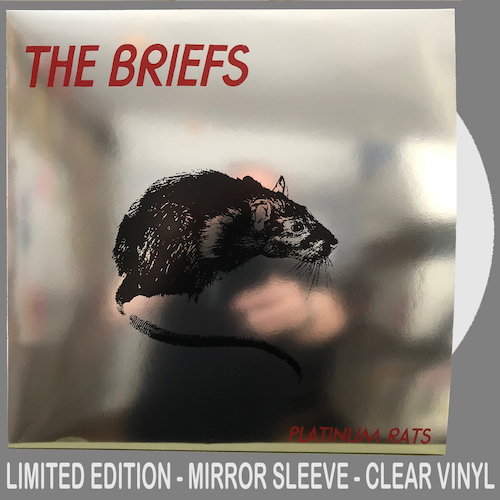 First pressing - Limited edition clear vinyl with mirror sleeve FIRST PRESSING ONLY
Skinny ties, plastic sunglasses, matching bleach-blond dye jobs, bad haircuts and a record collection centred on The Adverts, Buzzcocks, The Undertones and The Weirdos. Yes folks The Briefs are back with a brand new album! Platinum Rats is the band's fifth LP and the first since 2005's Steal Yer Heart. That's not to say they've not been busy - Singer guitarist Steve E. Nix and bassist Steve Kicks have released three albums in the last decade by their other band The Cute Lepers. Where The Cute Lepers records feature some added power-pop drive, The Briefs are closer in spirit to pure '77 punk - loud, raucous and fierce, yet cohesive, hooky and hilarious.
They have so much energy, it’s hard to believe they’re from Seattle, the city that put lattes and flannel on the map. The Briefs still make Seattle their home, but they’ve come a long way since their debut record, and they’re still cranking out hits. One of the hardest working bands in America. They’ll play any time, anywhere!
The band formed in 2000 and originally consisted of Daniel J. Travanti (guitar/vocals), Steve E. Nix (guitar/vocals), Lance Romance (bass/vocals) and Chris Brief (drums/vocals). They released their first full-length album, Hit After Hit, in 2000 on Dirtnap Records. The band was courted by and reportedly signed with major label Interscope Records, following their 2002 release of Off the Charts, but that deal later fell through.
The Briefs re-surfaced on California's BYO Records with the release of 2004's Sex Objects and the reissue of their Dirtnap-era LPs. In 2004, the Briefs went on a European tour without Lance Romance, who stayed behind to get his GED. In his place went bassist Steve Kicks of Vancouver, British Columbia's band, New Town Animals. Lance re-joined the line-up for the 2004 release party of Sex Objects, but retired from the band in 2005. Kicks since become a permanent addition and was a full member for the follow-up, 2005's Steal Yer Heart.
For more info on The Briefs check out The Greatest Story Ever Told, a movie about the band made in 2007. It’s available on DVD with a bonus disc including rare live recordings of some of the bands’ most popular hits. That's the history but fans both old and new should check out Platinum Rats, 12 tracks of pure punk rock pandemonium, it will not disappoint!