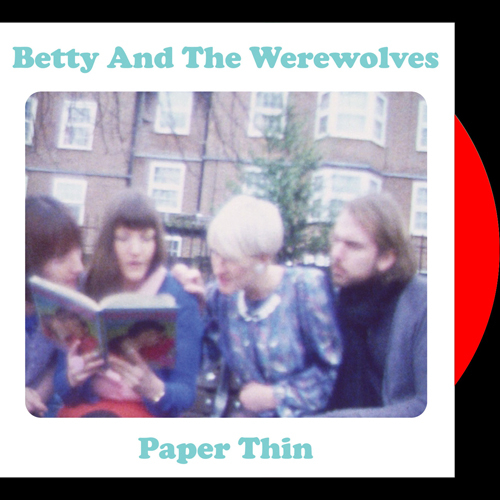 Betty And The Werewolves

Betty And The Werewolves third single, which is taken from their long awaited debut album ‘Teatime Favourites’ due out on July 5th. This one is on green vinyl (Also available on red)

Betty And The Werewolves are Laura McMahon on Vox/Guitar Helen Short on Guitar/ Vox/Keyboards, Emily Bennet on Bass/vox and Doug McFarlane on drums. Formed in 2007 are three girls and one boy from London and Cambridge who whoop and howl through the night as their sweetly sung melodies collide with glitter-struck punk guitars. Taking inspiration from luminary lycanthropes Virginia Woolf and Grandma Wolf, they sing ditties about falling in love with David Cassidy and strange encounters on night buses, shouting all the while and scuffing up their party shoes

The album is a great mix of indiepop and shouty punky pop songs with great lyrics and boundless energy. After a lot of stress over the cover it was decided that a selection of tea and cakes would fit the bill…and we think it does the job too.