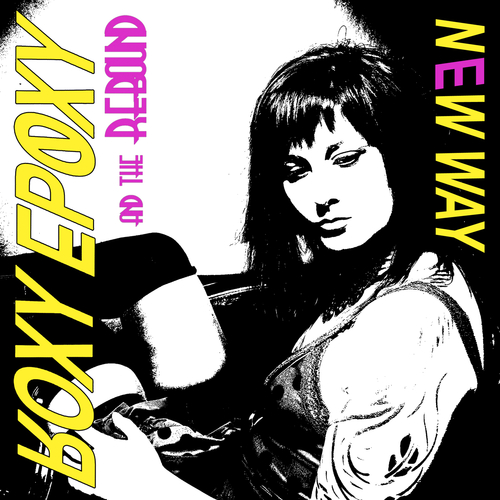 Roxy Epoxy And The Rebound

A limited edition coloured vinyl 7” featuring NEW WAY from the album ‘Band Aids On Bullet Holes’ plus an exclusive b-side called ‘PARASITE’. This is the original demo which went on to become ‘This Twist’ on the album.

Often associated with such fierce and striking artists as Karen O, Siouxsie Sioux, and Chrissie Hynde, Roxy Epoxy made a lasting impact on the punk and indie community in her former band, The Epoxies. Now, freshly rejuvenated and ready to tackle the music industry with both fists and a great set of pipes, Roxy embarks on the next chapter of her musical career with her newly-minted band Roxy Epoxy And The Rebound. Their new album Band-Aids On Bullet Holes gets released on April 6th, 2009 on Damaged Goods Records. "I think The Rebound are a bit more introspective than The Epoxies," explains Roxy. "The music is more intricate and is a bit more rock than pop. When the Epoxies broke up, I had a ton of material at different states of completion and finally had the time to dig into it. I had wanted to head in a slightly different direction for a while. This is the result."

This result is a dynamic album of punkified New Wave and synth-infused rock that stomps when it should skip and gallops when it should sway. The herky-jerky pop Banshee-esque goodness of "New Way" hearkens the early anarchic days of the London Underground, while the thrusting and velvet-texture of "I Know I Know" adds atmosphere and drenches it with drama. The melodic infectiousness of "Dependence Leads Your Fortune" is a propulsive and explosive stunner with meandering keyboards and swirling guitars, punctuated with Roxy's extremely distinctive vocals. "I think I am most proud of 'Dependence Leads Your Fortune'," she says. "I just feel it's the strongest song I've written so far... I've only been writing and performing music since late 2000,".

Formed in 2000 in Portland, OR, Roxy's former band The Epoxies burst on the scene with a handful of 7" singles and albums on influential Pacific Northwest labels such as Dirtnap and Fat Wreck Chords before releasing their final EP My New World on Metropolis. Feeling the need to feed her hunger to create even more music, Roxy Epoxy began writing after the band's break-up. The resulting album Band-Aids on Bullet Holes isn't a solo record as it is the genesis of her next band. "I'm still using the name Roxy Epoxy, sure, but this wouldn't have progressed this far without the people I've had the pleasure of working with," she explains. "It started out as a solo project as Drat [guitarist and co-writer of the album] and I wrote in his living room. It was based on many songs I had written during The Epoxies. But, when you add more people, the whole thing broadens. I like to have outside input."

With tour dates getting locked down, the energetic Roxy Epoxy is excited to bring the new songs to an audience of fans and new faces. "I love performing and can't keep still when it comes down to it," she says. "It should be high energy and exciting to watch. I really like interacting with people during performance. I'm always up for someone jumping up and doing some singing or dancing with us."

Roxy Epoxy, was amazing. She never stopped moving, and belted out the super fast songs in a crazy "Is she a tenor?" low voice that was kinda hypnotic. Who is this band? Who is that girl? Holy shit, did I fall in love...
- People Who Are Cool Interview Series. By Sean Abley

Roxy Epoxy burst onto the music scene in 2000 with Portland, Oregon synth punkers, The Epoxies. Never having been in a band before, she put her nerves to the test. She decided it was time to finally get on stage and never turned back.

"I just wanted to try something that intimidated me and play some local shows. I ended up touring the world."

Roxy Epoxy has been compared with admired artists such as Chrissie Hynde, Siouxsie Sioux, and Lene Lovich and even a young Leonard Graves (Dickies).

"It also doesn't hurt that lead singer Roxy Epoxy, the love-child of Gary Numan and Siouxsie Sioux if ever there was one, has utterly killer pipes as well as this reviewer's hands-down vote as totally best fawking frontwoman ever personally witnessed by him."
- THREE IMAGINARY GIRLS By Bill Bullock