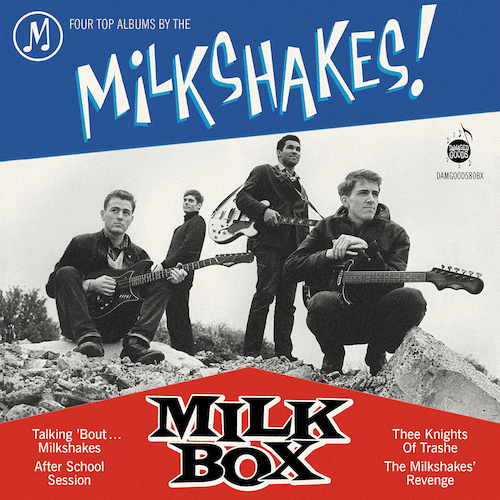 A boxed set of 4 CDs featuring four classic albums by The Milkshakes.

We present four albums by The Milkshakes in a clamshell box set complete with booklet.

The four albums in the set are -

When punk rock group the Pop Rivets broke up in 1980, Billy Childish joined forces with Mickey Hampshire, a Pop Rivets roadie who had been performing in a group called Mickey and the Milkshakes with his cohort Banana Bertie. The two began writing songs together and the group released their first LP, Talking ’bout Milkshakes! in 1981. With Childish and Hampshire sharing guitar and vocal duties, Bruce Brand on drums, and Bertie on bass (later replaced by Russ Wilkins then John Agnew), the Milkshakes’ sound was a primitive blend of British beat groups, like the early Kinks at their toughest, and hard-rocking American guitar instrumentalists like Link Wray. This sound came to be known as the “Medway sound” and the core members have been playing a variation on it throughout their whole careers.

The Milkshakes were a very prolific group, recording nine records in their four years together, and the band was very much a blend of Childish’s primitive songwriting and Hampshire’s more melodic leanings. The group also masterminded and backed a Medway girl group, the Delmonas.
When Mickey left The Milkshakes in 1984 Childish, Brand and Agnew went on to form Thee Mighty Caesars. Mickey and Bruce now play in The Masonics along with Ludella Black from The Del Monas, and Russ lives in Scotland and fronts the Wildebeests as well as being Lord Rochester.