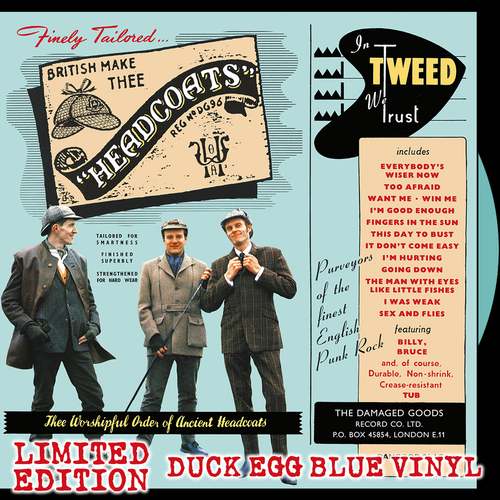 **FINALLY OUT OF MOTH BALLS!** **CLEAR DUCKEGG BLUE VINYL - 700 COPIES ONLY**
**REISSUE OF THEE HEADCOATS' 1996 CLASSIC LP FEATURING SOME OF THEIR FINEST CUTS!**
Thee Headcoats were mainly Billy Childish (Git/Vox) Bruce Brand (Drums) and Johnny Johnson (bass), they formed in 1989 after Billy's previous band Thee Mighty Caesers gave up the ghost. By 1992 they had already released something like 6 albums and 15 singles.
Lots more releases followed including this great LP In Tweed We Trust originally released in 1996, the follow up to the equally great Conundrum. Thee Headcoats carried on touring and releasing records in every corner of the world until mid 2000 when they called it a day.

During the '90's I must have seen them 60 times, I even went over to Japan with them in 1993. There was something really natural about them, no bullshit. We did the 'We hate The Fuckin' NME' single after NME journo Johnny Cigarettes walked out of their gig in Archway after insisting that he should get in for free as he was from the NME and then reviewing Thee Headcoatees by saying their was no girls in the band (he left before they came onstage!!)