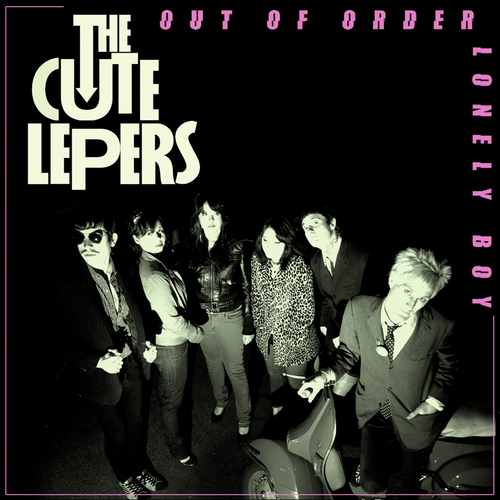 Steve E Nix & The Cute Lepers debut album ‘CAN’T STAND MODERN MUSIC’ will be coming out on Damaged Goods on the 28th April, preceded by this 7" 'Out Of Order' on the 14th April

The 7” has an exclusive track called ‘Lonely Boy’, a cover of the Sex Pistols Cook N Jones tune.

it's on two different colours, Yellow and Green.

The Cute Lepers are heading over to Europe for a full tour in May 2008 including a date at Londons 100 Club on the 6th of May.

Who are the Cute Lepers I hear you ask...?   Formed by Steve E Nix & Kicks from The Briefs (who are taking a break for the next year or so) along with Zache Out on Guitar, 'Tude & Yelps, Josh Blisters, Drums and children, Bent Rewd Leper III on Vox, Tambo, Big Handclaps, Analisa Leper, Vox, Tambo, Medium Handclaps & Miss Meredith, Vox, Tambo, Little Handclaps.

From their MySpace page...The Cute Lepers: Originally the idea for the band was that it was to be something equally influenced by first wave punk, mod-revival, power pop, and a retarded reverence for Johnny Thunders... oh yeah, with occasional hints of doo-wop, oldie rock'n'roll and a load of female back-up vocals. I still think this is an excellent idea, but as the band has really come together over the last few months, I am starting to think a barbershop septet composition may not feel out of place. We've got one album "in the can", and we're currently looking for a home for it. In the meantime, when not playing shows, we'll be cruising vintage vespas, hanging around greyhound bus stations, contemplating hairdos, and working on the next album. It's gonna be a blast, and artistically... hey, sky's the limit! We've got a lot of voices to work with and we happen to know some very stylish horn players. Thanks to everyone who picked up the first single and we're looking forward to beating our songs into your heads on tour in 2008! ---Steve.

Unfortunately at this time we can't offer all the The Cute Lepers - (I'm) Out Of Order tracks as individual wavs, as some of these tracks exceed the shops maximum (9mins) download length.

Unfortunately at this time we can't offer all the The Cute Lepers - (I'm) Out Of Order tracks as individual wavs, as some of these tracks exceed the shops maximum (9mins) download length.