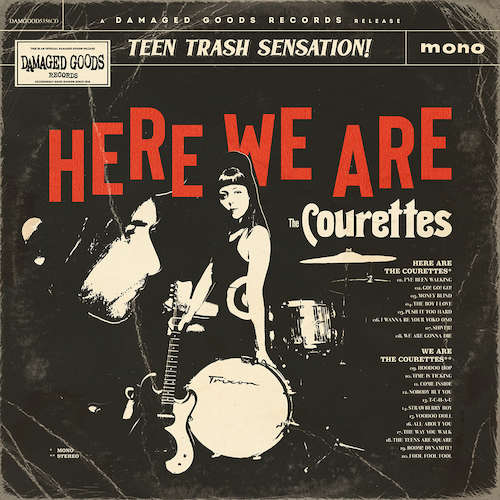 Here We Are The Courettes (CD)

The Courettes' first two albums remastered and reissued on a 2-on-1 CD!

HERE ARE THE COURETTES
The Courettes´ debut album from 2015. Recorded in only two days by Kim Kix from the iconic PowerSolo in a small, cramped studio in Denmark. Unpolished tunes - fresh, raw and alive tunes - and the garage is shaking! Minimal overdubs, no editing, no auto tune, no bullshit. Punk straight out of the garage and a lot of riot grrrl charisma.
Mixed by Kim Kix and Nikolaj Heyman. The album features eight original songs all in Mono. Now it’s reissued with a new sleeve, coloured vinyl and new mastering making it sound better and louder than ever!


WE ARE THE COURETTES
The Courettes´ 2nd album was produced by PowerSolo’s Kim Kix with Nikolaj Heyman as engineer in 2018. This album goes deeper in its songwriting showing The Courettes´ love for '60s Girl Groups like The Ronettes and Shangri-Las. Fuzzy wild sounds are there, loud as hell drumming also, but some additional elements were added to their garage recipe: soul ballads and a handful of '60s girlie pop. Sonic quality is now stereo and overdubs like organ, piano and backing vocals were allowed – all performed by The Courettes themselves, of course! Including 'Boom! Dynamite!', 'Time is Ticking' and 'Voodoo Doll' (featuring horror movie legend Coffin Joe).