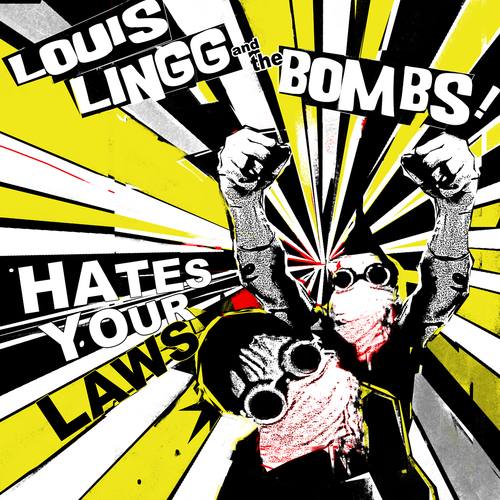 Louis Lingg And The Bombs

Louis Lingg And The Bombs - Hates Your Laws

Louis Lingg and the Bombs are goddamn punk-rock-garage-pop-anarcho saviours of the 2 and half minute pop song. They come from Paris where they regularly blow up little bars with explosions of snot and beer fuelled punk rock energy.
The group is named after Louis Lingg, the famous Chicago anarchist who committed suicide on death row in 1887. Some of their songs are ultra-political anarchist punk rock and some of their songs are like children's nursery rhymes. ALL of their song's are full of interesting pop hooks and melodies and they are sung with energy and commitment.
The line up:
Josh (ex-Tchiki Boum, ex-In Vitro, Producer of Underground Railroad, Foxglove, First Part, Flashing on Bright, King of Conspiracy and NMA ) on Vocals and Guitar.
Rudi Pourri (from Udigrudi) on Bass and Vocals.
Ben Flob (visual artist) on Guitar and Vocals.
Gilbertmuda (ex- The Troglodites) on Drums and Vocals.
Clem Phlegm (from Foxglove) on keyboards/ Julie Hate on vocals
Their influences:
Punk bands like The Briefs, The Epoxies, Antiflag, Pansy Division and The Dickies. They have a strong love of '77 style punk like The Buzzcocks, The Clash, The Adverts and The Undertones.
Never forgetting that they are children of the 90s having grown up with bands such as Nirvana, Bikini Kill, Sleater Kinney and The Butthole Surfers. In their song-writing however, their admiration of classic children's songs is clearly visible, as is their 60s influences; Shirley Ellis, Aretha Franklin and Nancy Sinatra.
After a series of demos, they finished their first 7 track CD EP in Dec 2006, In Sept 2007, they released the single Princess Mononoke in the UK on ORG Records to acclaim and radio play on XFM and Resonance FM. ‘Chomsky changed my life’, is on the new PPP Zine / Generation Extreme compilation (France).Conspiracy, is on volume nine of the Netbloc compilations released by Blocsonic. Blocsonic is run by members of Slamjamz, Public Enemy's record label.

Unfortunately at this time we can't offer all the Louis Lingg And The Bombs - Hates Your Laws tracks as individual wavs, as some of these tracks exceed the shops maximum (9mins) download length.

Unfortunately at this time we can't offer all the Louis Lingg And The Bombs - Hates Your Laws tracks as individual wavs, as some of these tracks exceed the shops maximum (9mins) download length.