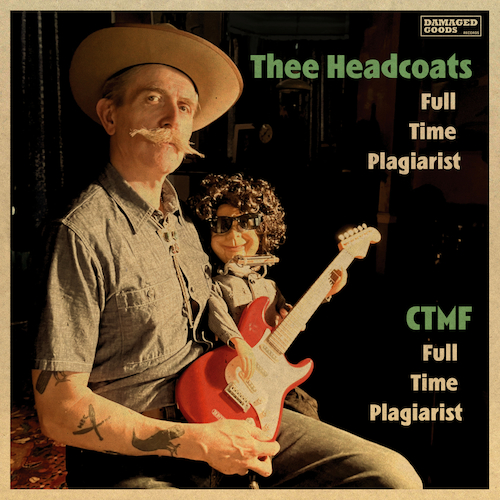 Thee Headcoats and CTMF go head-to-head! Two Billy Childish bands battle it out with versions of the same song!
Thee Headcoats version is taken from their forthcoming new studio album Irregularis: The Great Hiatus. The CTMF version is exclusive to this release.
Two versions of the same song by different bands. Has each band heard the other version? If so, did they pass judgement?
No, neither group heard the other version. I had forgotten how the CTMF version went - even though it was only a few weeks past. As with all the LPs there’s no rehearsal. I play the track - we do a run through and then press record. I don’t remember how either version goes now.
There’s a famous saying – “Talent borrows; genius steals”. Are you a borrower? A stealer? Or something else entirely?
As I’ve said before, I follow strict music industry guidelines and only plagiarise 50 percent of my material. Kurt Cobain put it better - he said people thought he was original because he didn’t let on what he was ripping off. Though we know he got the riff to his most famous song from The Daggermen, a local group Wolf (our drummer) played in.
What was it like recording with Bruce and Johnny after such a long time?
We met up in the studio in the morning, had a cuppa, a chat, plugged in and recorded the LP (in two days.) It was the first time we'd all been together in about 30 years, and it felt like yesterday - just laughing and joking about how rubbish we were and generally having fun. It was like no time had passed at all.

Love the sleeve picture for this 7”! A lot of people miss the humour in your work, does that frustrate you?
I’m not frustrated but surprised that the British seem to have lost their sense of humour somewhat - they’ve been pretty po-faced since 1978, I think. I was brought up on Pete and Dud when I was a kid. Interestingly a lot of comedians seem to like what we do. Stewart Lee has always been a fan and he said there are others of his ilk. If something can’t be mocked or laughed at, I’m not that interested in it.