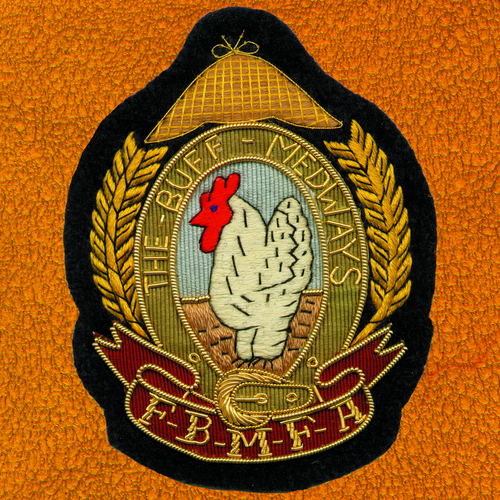 Don't Hold Me Back

The Buff Medways - Don't Hold Me Back

Their full name is Wild Billy Childish & The Friends of the Buff Medway Fanciers Association.

During the 19th century a breed a chicken was developed peculiar to the Medway area. The breed, now extinct, was a table bird for the London hotel market. The BUFF MEDWAY project, based at Fort Amherst, Chatham, is attempting to recreate that ancient fowl through a selective breeding project.

The original line up was Billy on guitar and vocal, Johnny Barker (bass) and Wolf Howard (drums), both ex-Daggermen. Johnny has now left the band to be replaced by Graham Day ex of The Prisoners

The BUFF MEDWAYS cut a dash with their Victorian army uniforms and their vintage Vox amps. The gear may be old but as one critic wrote the band are "the snarled lip embodiment of rock'n'roll spirit rather than nostalgia or shabby revivalism". Live and on record The BUFF MEDWAYS are all about great songs and vibrant raw energy - no frills.

They have now released four albums, two for Graham Coxon's label Transcopic Records 'Steady The Buffs' & '1914', one on 'Vinyl Japan' called 'This Is This' and their last album 'Medway Wheelers' is out on Damaged Goods.

Check out their female alter-egos The Buffets.

The Buffs have now decided to call it a day and played their last gig to a totally sold out show at London's Dirty Water Club on the 27th of October 2006.

A live album is being put together for release sometime in 2007.
The Buffs will be sorely missed...but don't fret as Billy has a new band called The Musicians Of The British Empire...

...as Beck, one of Mr Childish's many admirers succinctly put it: "that's how a rock'n'roll group should sound!".

"the most garage and most punk rocker alive"
NME