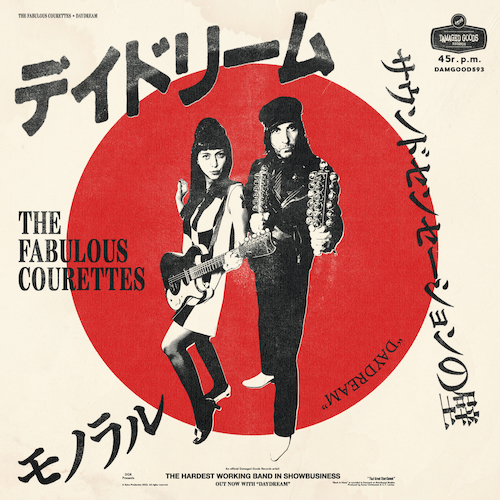 Konnichiwa! The Courettes go to the land of the rising sun – and they sing in Japanese!

The “hardest working band in showbiz” took another step closer to world domination traveling around the globe and landing in Japan in October for a successful tour full of packed concerts, sushi and Japanese rock ‘n’ roll!

Their new upcoming 7” single is an outstanding version in Japanese of ‘Daydream’. The English version, from their latest album Back in Mono B-sides & Outtakes, is also included on the flipside. On beautiful white vinyl with red labels (just like the Japanese flag) the record is due out on January 27th on Damaged Goods Records, shipping from the UK to all corners of the western world and beyond.

The original release on Japanese label Target Earth / Naris Records sold out by the third day of the Japanese tour. The mix is of course by Japanese Spector aficionado Seiki Sato, who was responsible for the Back in Mono album’s Wall of Sound extravaganza. So, ladies and gentlemen, get ready for one more spit ‘n’ snarl wall-of-sound garage gem with Martin blending class and wildness on the drums and Flavia bursting out on top - in Japanese! Kampai!