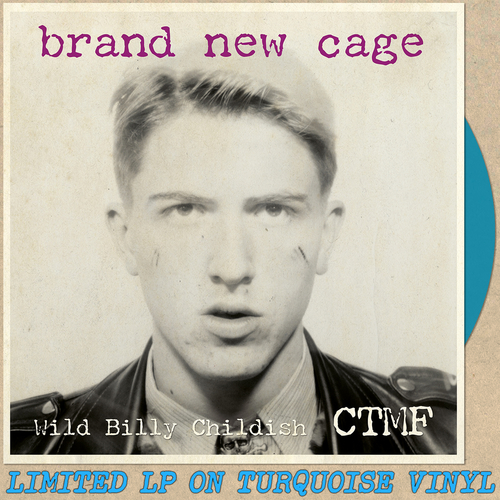 “We're like a cherry tree in the garden that nobody can be bothered to scrump cos it has slightly undersized fruit which has not been standardised for a supermarket. But we're the real thing and the jays and the crows like us.”

Wild Billy Childish & CTMF are back with their fifth album in five years. Brand New Cage follows the critically acclaimed SQ1 album from 2016. It features 10 new Billy Childish songs along with two written and sung by the band's bassist Nurse Julie. Subjects include lost landmarks of '70s Chatham, the true revolution of punk, spirituality, lost loves and the sidelining of Brian Jones from The Rolling Stones.

Some of the tracks have already been featured in the first double session on BBC 6Music, this was a track a night on the Marc Riley & Gideon Coe shows in July 2017 (Now released on a 10” LP – catalogue number DAMGOOD485). The sleeve art features a photo of an 18-year old Billy taken in a King's Cross photo booth in September 1978. - “I used to cut these tribal marks into my cheeks every few weeks with a razor blade. I was really interested in African tribal scars, and I knew they had ash in there so I would rub cigarette ash in – very painful! I'm actually dressed there the most dangerous way you could be, as a punk rock teddy boy. The teds didn't like you wearing any ted gear.I've got a leopardskin waistcoat, bootlace tie and my hair flat. You had 40 year old men that would glass you. We'd go see Bo Diddley in '70s and we'd dress a little bit ted. I was on a few death lists locally with teddy boys.”