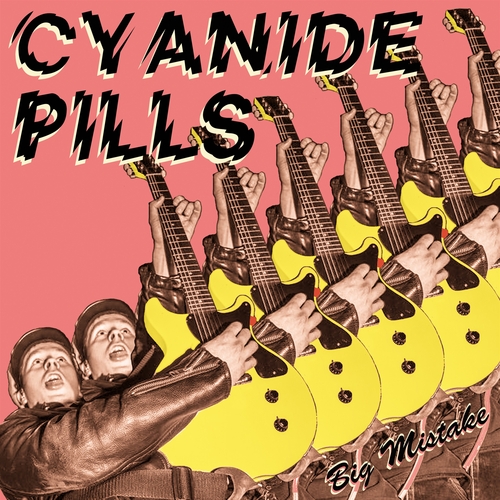 New 7” from Leeds' finest!
Fact #1 - Cyanide Pills are a brilliant live band. Anyone who has seen them at Rebellion Festival or on one of their jaunts around Europe will agree.
Fact #2 – They write great songs.

Fact #4 – It features an exclusive B-side 'My Baby's Become A Right Wing Extremist'!

Keeping the spirit of '78 alive, the band's mix of punk blasts and melodic power-pop has never sounded better. With razor-sharp twin guitars, a pounding rhythm section and un-matched lyrical barbs, 'Big Mistake' is taken from the band's new album Sliced And Diced and is backed by an exclusive B-Side.

Since the last LP (2013's Still Bored), the band have gigged alongside some of the biggest names in punk including Buzzcocks, UK Subs, Johnny Moped, The Lurkers and many more.

Cyanide Pills will be touring Europe in March and also play Rebellion Festival in Blackpool this August.

Like the previous album, Sliced and Diced was recorded at The Billiard Room in Leeds by Wedding Present producer Carl Rosamond.