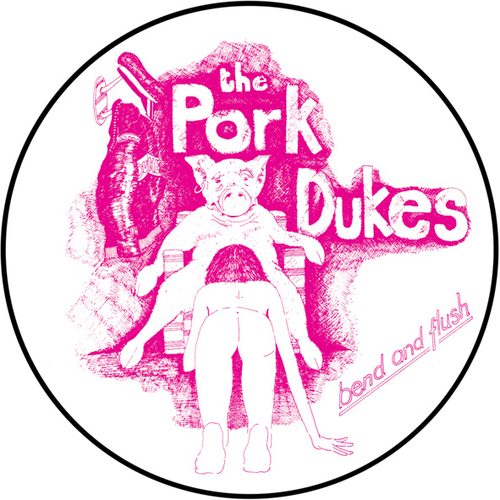 The Pork Dukes - Bend And Flush

Formed in 1976, the Pork Dukes were ruder than the Sex Pistols, but didn't achieve the Pistols' notoriety. Playing incognito, there were rumours the Pork Dukes featured Keith Moon on vocals, members of Led Zeppelin, The Rezillos, Tenpole Tudor, Steeleye Span and even Dudley Moore. Only some of this was true.

The Pork Dukes released their first single 'Bend & Flush' in the heady summer of 1977, and the rude content and cover of the single helped it sell over 20,000 copies. Although the notorious Pork Dukes had three UK indie hit singles and two album releases, they received no radio airplay. That's not surprising, because the band offended society with sexy song titles, like: Throbbing Gristle; Making Bacon, My Mother Gave Me A Gun For Xmas, I Like Your Big Tits, Let's See If It Fits; and Telephone Masturbator.

The late, legendary UK DJ John Peel, on his Radio One show, remarked that "the Pork Dukes would have hits with their infuriating catchy singles, were they not so manifestly unbroadcastable!"

But even a nod of approval from Elton John at the time didn't help: the curiosity surrounding the Pork Dukes afforded them cult status but after releasing two albums the band split in 1979.

In the last four years since the band has reformed, three re-released albums have been followed swiftly by a new single, mostly featuring artwork by the renowned UK low-brow fetish artist Vince Ray. The single, 'Pop Stars', was produced by Kid Krupa, the guitarist from 1970s band The Revillos, shortly before he died in 2005. And now the band's merchandise - designed by UK low-brow fetish artist Vince Ray - has become very collectible.

Clearly, since the heady days of punk a number of people could lay claim to being the rudest singer/band. But no-one does it with the panache, humour and fun of the Pork Dukes. The band has a tongue-in-cheek, punk-fuelled sing-a-long live act that captures the imagination of both sexes - providing you're open-minded and like a good laugh, because the Pork Dukes were aural sex. They were, and still are, the cream of the obscene.

We put out the 'Kum Kleen' (Damgood 229) album a couple of years back which featured a lot of unreleased Odds & Sods from the last 30 years and now due to Vinyl Japan calling it a day we have re-issued the compilation 'All The Filth' with 4 extra tracks taken from last years 7" on Bin Liner records.