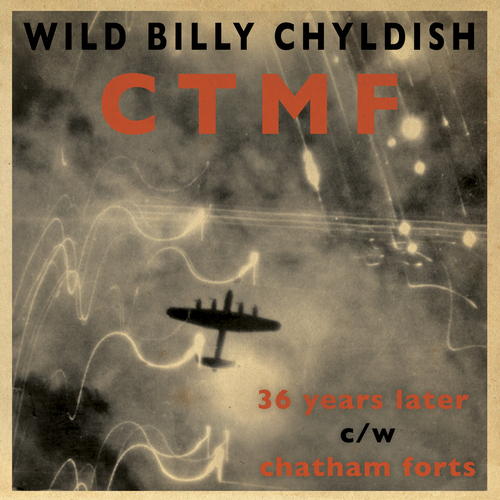 EXCLUSIVE 7” FROM BILLY CHYLDISH'S NEW BAND ‘CTMF’
The lyrics to the b-side, Chatham Forts where written around christmas '76, when Billy first fantasised about forming a
punk rock group. Having no gear, or real players CTMF were still-born. Later in 77 The Pop Rivets came about. He’s been
preocupied for the last 36 years so the Chatham Forts never got the kiss of life till this year when he dug the words out
and started over again. The name comes from his involvement with the Medway Military Research Group, which he co
founded in the early 70's with a school friend, Keith Gulvin. They were the world's first fortress study group, and Billy and
Keith are still involved in research of the local forts in our local towns. Really, Chatham Forts would have been headed by
Billy under his first punk moniker, Gus Claudius, but regardless, due to his genius CTMF sound as new and broken now
as the would have in 1977. The track 36 Years Later refers to the digging up of that old group name and how my sensibilities
remain the same to his punk ethos of 36 years ago (+ the LP cover shows us set to trek a mile out out on to the
Medway mud flats to retrieve a WW2 bomber engine). David Bowie gets a a mention in the lyrics as one of Billys
favorite enemies. Thou he rote and recorded the track befor the old-so-and-so re-emerged, Billy must confess that he was
unaware he'd retired and asumed he was still anoying people with his 'I'm from mars' line. His friend Tracey Emin assures
him that he's a lovely fellow, which he’s sure he is, but he didnt even like his stuff when he had a real group sorting his
songs out for him in the early '70s. He know that makes him in the minority of one, but he likes it like that.
The truth is, he dislikes rock music, and is officially the worst fan in the world.
-------------------
2 EXCLUSIVE - NON-ALBUM TRACKS
-------------------