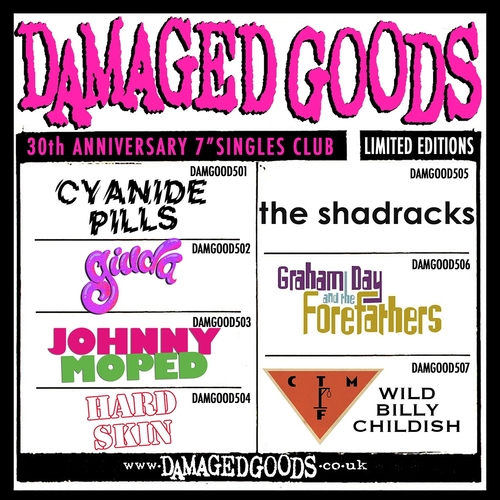 Sorry, 30th Anniversary Singles Club (250 copies only) is out of stock.

AFTER OVER 500 RELEASES BY 168 BANDS WE'RE CARRYING ON DOING WHAT WE DO BEST BY RELEASING MORE RECORDS!

WELCOME TO THE DAMAGED GOODS

We asked a few of the bands we've worked with over the years to come up with a cover version of one of their favourite 7" singles, the interesting thing is that they also had to do the original b-side as well. Each single comes in a sleeve which pays homage to the original.

That made it a lot trickier and a few fell by the wayside but we've ended up with a great set of seven 7" singles.

There will be a limited coloured version of each one which will only be available by mail order if you join the club. Standard black versions will also be available individually a few weeks later.

The final bands are...

GRAHAM DAY AND THE FOREFATHERS

It costs £70 plus postage to join the club and we'll be shipping the singles out in sets of two at a time, there will be something nice in with the last one.

The club singles will be on coloured vinyl, except one which is a picture disc.

There's only 250 sets of these beauties so get joining the club!

*Strictly limited to one per customer, we will cancel any duplicate orders.*

In the spirit of the original singles, there will be NO digital on any of these.